Maybe you need to up your vocabulary… Or maybe you’re playing Zombie Dice. 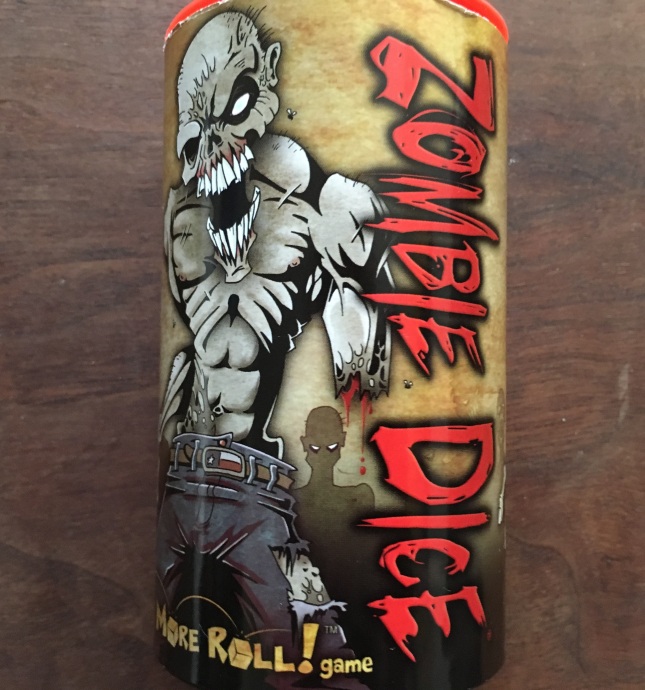 Zombie Dice is a dice-rolling party game by Steve Jackson Games. In it, players (as many as you want) take the rolls of zombies, each try to get as many delicious brains as possible before taking too many shotgun blasts to the face. It’s a press-your-luck style game; a player’s turn consists of a series of dice rolls, each one increasing the chances for more brains, but also upping the risk of getting shot and getting nothing at all. With it’s thirteen custom dice and it’s simple rules, Zombie Dice is easy to learn and quick to play.

On their turn, a player takes 3 random dice from the dice cup without looking. Dice are color coded by risk; green are the safest, yellows are medium, and reds are the riskiest. Players roll the dice, setting aside Brain results (needed for victory) and Shotguns (3 of these end the turn). Players can choose to score (taking points equal to the number of rolled Brains) or continue. If they continue, they re-roll any dice that came up Footprints on the first roll, along with enough fresh dice from the cup to total 3. If at any point a player gets 3 Shotguns, though, their turn ends immediately and they score no points. Players keep going until someone gets 13 points; then everyone finishes a last round, and whoever has the most points wins.

The real beauty in Zombie Dice is it’s simplicity. Players can learn it by the first turn and jump right in. Aside from deciding when to push on and when to play it safe and score your points, there’s no real strategy. This can be a draw, especially for newer gamers who aren’t after heavy games, or for anyone looking for a quick, light game. The unlimited number of players makes this game a nice one to include as an option for a large group, since it allows people to drop in and out of it fairly quickly and smoothly. 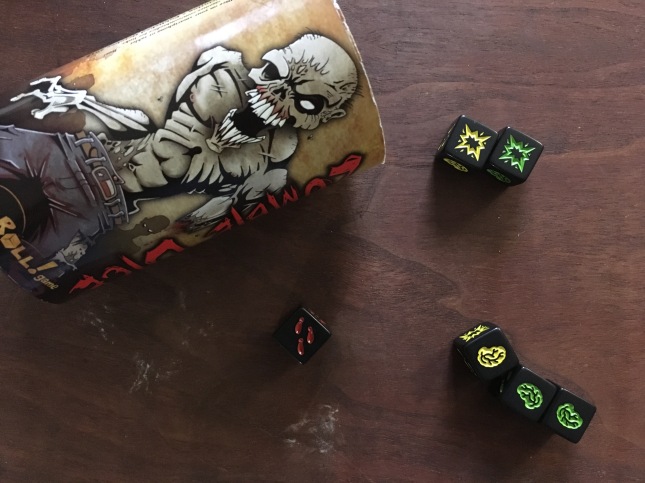 You have a chance for more than 3 points, but do you risk just one more shotgun?

Of course, the lack of real strategy might make the game bore some players. Certainly it’s not a game to play over and over again in a short time. There’s only so much you can stretch the fun of rolling the same dice again and again and again. The other real downside of the game is that it has no inherent social elements about it, which I think is strange for a “party” game. Sure, you can talk to the other players, but not only is there not anything in the game requiring it, there isn’t really anything in the game even prompting it. When I played, we would try to convince one another to keep going (often trying to push each other into riskier and riskier plays), but that was really it. Nothing you do can affect other players or interacts with anything other players have. It’s almost like the game is a bunch of people playing a solitaire dice game at the same time, rather than a true group dice game.

Still, lack of strategy and social elements aside, Zombie Dice does well what it’s supposed to do. It’s quick. It’s simple. It’s a little macabre and silly without being gory. It’s fun, as long as you don’t try to stretch it out too far. Like the runners the Footstep dice signal, the game is fast food (get it?): good, but not necessarily filling. Still, there’s nothing wrong with fast food once in a while… It’s better than shotgun-wielding food, at least.